Chromium-6, also known as Cr-6 and hexavalent chromium, is a natural element that occurs in groundwater in the Coachella Valley and elsewhere due to the erosion of natural deposits. Cr-6 was in groundwater long before the Valley was developed and before technological advances allowed detection of minute levels, such as one part per billion (ppb), which amounts to about one drop in a swimming pool. Cr-6 levels are controlled in California drinking water by existing regulations that include a Maximum Contaminant Level (MCL) of 50 ppb for total chromium, which is twice as stringent as the national MCL for total chromium of 100 ppb established by EPA.  The drinking water CVWD supplies to its’ customers meets this drinking water standard as demonstrated in results provided in the Annual Water Quality Report.   CVWD continues to monitor the state’s work to develop a new drinking water MCL for Cr-6 and will inform customers when they are allowed to provide input to the state on this process.

California’s Senate Bill 351 adopted in 2001 required the state to develop a drinking water standard for Cr-6. This legislation triggered work by CVWD to find the best treatment method, even before state health officials enacted the country’s first Cr-6 drinking water standard or MCL in 2014. That MCL of 10 (ppb has since been abandoned, along with a 2020 compliance deadline, after the state lost a lawsuit challenging the standard. In May 2017, a judge invalidated the MCL because the state failed to properly consider the economic feasibly of compliance. The State Water Resources Control Board is now working on establishing a new Cr-6 MCL for drinking water, which could take several years.

In 2016, CVWD was moving ahead with a plan to build a conventional ion exchange treatment system to meet the 2014 Cr-6 MCL. It would have required construction of buildings at 29 well sites and a central facility for regenerating resin used in the treatment process, as well as pipelines to service the system. Some communities expressed concern that the treatment facilities would be too noticeable by neighbors and require too much traffic to maintain. The project would have cost over $250 million and caused an increase in water rates. Just as construction was set to begin, testing revealed success in an alternative treatment process using stannous chloride. Stannous chloride is made from tin and has been used as an antioxidant in toothpaste and food products for many years. It is also an approved drinking water additive used to protect water pipes from corrosion.

The CVWD Board of Directors temporarily halted construction of the ion exchange facilities in October 2016 and approved launching a pilot study to evaluate the feasibility and effectiveness of stannous chloride at a CVWD well in Palm Desert. This was followed by two months of laboratory testing on water from another well in Desert Hot Springs. In May 2017, test results showed that stannous chloride successfully reduced Cr-6 levels in drinking water. These findings led to development of the full-scale demonstration project in the water system serving Indio Hills, Sky Valley and some areas in and around Desert Hot Springs.  This demonstration project, which ended in February 2018, successfully reduced drinking water Cr-6 levels using stannous chloride. Because of this testing, CVWD is prepared to meet a future Cr-6 drinking water MCL set by the state as low as 10 ppb. The stannous chloride treatment option is substantially less expensive and has less impact to the community and the environment than other methods.

We want your input. Coachella Valley Water District values feedback from all members of the community as we strive to make the best decisions for our customers. Fill out our online feedback form. 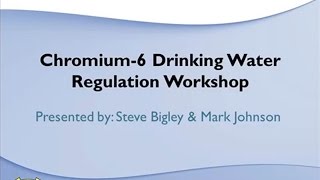